Many of the predictions of Causal Economics center on the impact of consolidated power, because that is one of the main conditions that allows for decoupling, driving up B/C ratios for those with power and driving down B/C ratios for those without power. Economic freedom and economic consolidation are at opposite ends of the spectrum. Think of a theoretical spectrum from ‘perfect competition’ to ‘perfect monopoly’.

With these things in mind, we’ve crafted a potential Economic Freedom Index, inspired by the core Causal Economics concept of coupling.

We’ve defined it as follows:

Crunching the numbers for a short period of history we see the results in the table below. The data shows that economic freedom does jump around and has been trending down for the last decade. 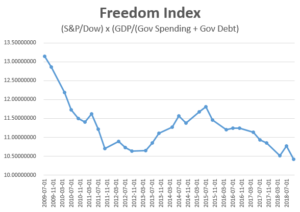 This is a concept that may or may not add value. We’ll keep exploring it and are interested in any feedback to improve it.

Causal Economics is a frontier branch of behavioral economics. It explains behaviors that can’t be effectively modelled by existing mainstream theories and delivers unique applied insights. Its central concept is causal coupling of cost and benefit – across individuals and society.